My new hobby: sewing and quilting!

My new hobby: sewing and quilting!

Hey guys! There has been a terrible thing going on that has kept me, for the most part, unable to spend much time at all here. That terrible thing is "work" - which, in my case, involves herding a large group of 6th grade kids forward in life so that they may finally get the heck out of my room. This group - well, it's just another one of "those years" when ya gotta wonder about people. By people, I mean specifically those making babies who shouldn't be doing such a thing. Not going to say anything more about THAT - since I don't need to get hypertension, high blood pressure, or have a stroke before June 23rd!

On to the real reason for this post. Guys, everyone here has several hobbies or avocations that include our shared favorite, the shooting sports. Recently, my wife surprised me on my 50th birthday by getting me a brand new sewing machine - that's right, a Bernina 350PE - to get me jump-started on a craft hobby I've always wanted to get into, QUILTING. Yes, the manly art of sewing with the intent of creating quilts! My big interest is related to family - with both sides of my own family very much carrying on the fine tradition of quilting in some way. Sewing also appeals to me because of the many practical applications - as an avid hiking and camping family (my wife and I, not so much anyone else in our family!) I end up often wishing to be able to repair, modify, or alter my camp gear and packs.

Which brings us to the topic of the day - my initial efforts to modify hunting/hiking gear with my new Bernina sewing machine. Many of you guys, either former/active duty military, or hunters and outdoorsmen, appreciate the practicality of military BDU's or ACU's and as a former Virginia Guard guy, I grew up with the old-school "legacy" Woodland camo BDU's. Always enjoyed them after service for the practicality of the cargo pants and/or shirts. When digital ACU's came out on surplus, I began getting them for hiking/camping as they have been cheap at gun shows when I see some of the usual vendors I know. Of course, the current Multicam uniforms the Army uses in A-stan, and the Marpat uniforms the Marines use are becoming more available as used surplus at the gun shows too, and I like just about any variety of camo I come across for the different woods and fields conditions in my area.

The "tactical tailor" DIY modifications (mods) that you see out there on such clothing ranges from the mild to the wild (look into the RAID mods folks do with their gear) but for me, I had always been interested in a few basic alterations to make these newer uniforms better suit my purposes. One thing I like is more QUIET and less VELCRO in some parts of these newer uniforms. In this post, I am just showing a few pics of my very beginning efforts to replace velcro take-up strips for the Multicam shirt sleeve cuffs with buttonholes and a button - which I modeled from the Marine's Marpat combat shirt cuffs. Very easy to do - my new sewing machine has a great computer with a ton of stitching programs - buttonholes tops the list of ones I will be using a bunch.

After I used a seam ripper to remove both Velcro panels, I measured the 3 buttonholes on the Marpat shirt and just used a Sharpie on the inside of the cuff on my "project" shirt to aim myself. After you sew a buttonhole, you use either a knife or scissors to cut the hole between your threads, and you are good to go! Same weekend I did the cuffs on this shirt, I replaced the velcro tabs on my ACU pant's pockets with buttonholes as well. Even made my wife happy by repairing one of her favorite summer pants that had a broken metal snap stud with a button and buttonhole instead!

OK, so I am pleased as punch with my new toy and learning new skills. This thing also punches through cordura and heavy canvas like butter! I made velcro "keeper" tabs for my cheap rigger's belt I wear when hiking/camping outdoors - instead of buying a 30-40 dollar belt that had velcro, I just added on my own - very satisfying indeed! So hope y'all get me some feedback - maybe some of you folks do the same, tailor your own gear, use a machine - I am looking for more ideas and projects. Have a great weekend! 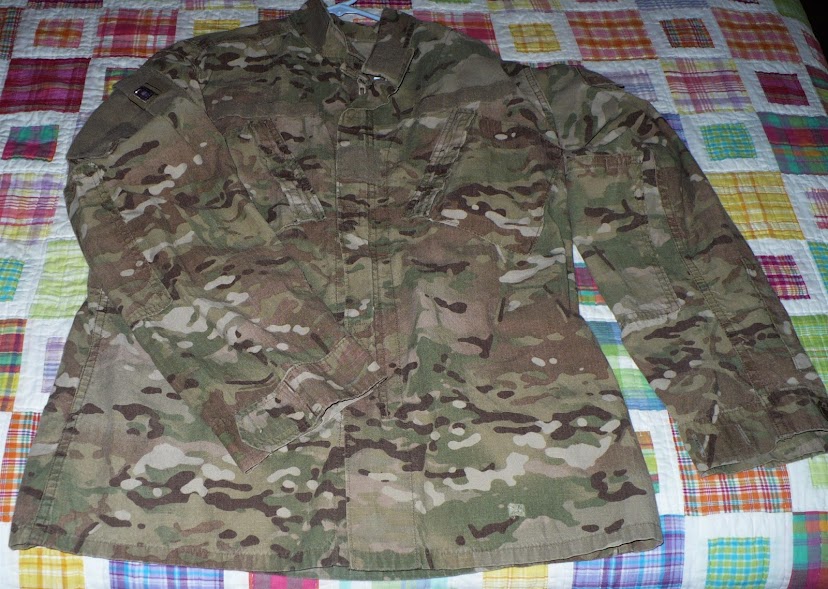 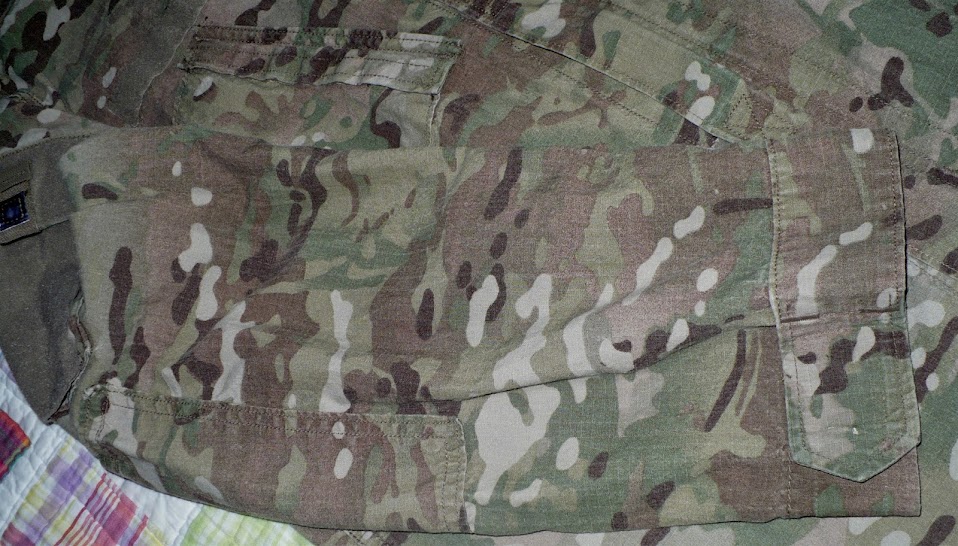 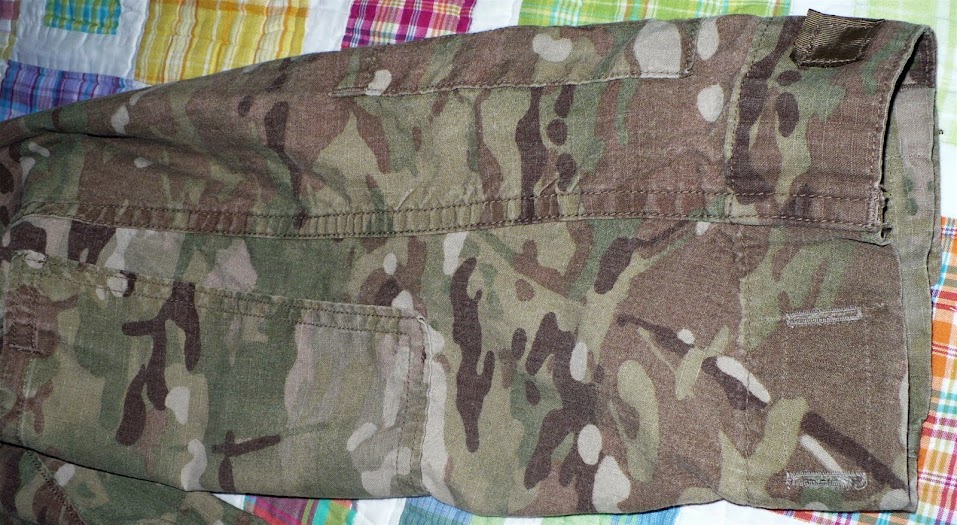 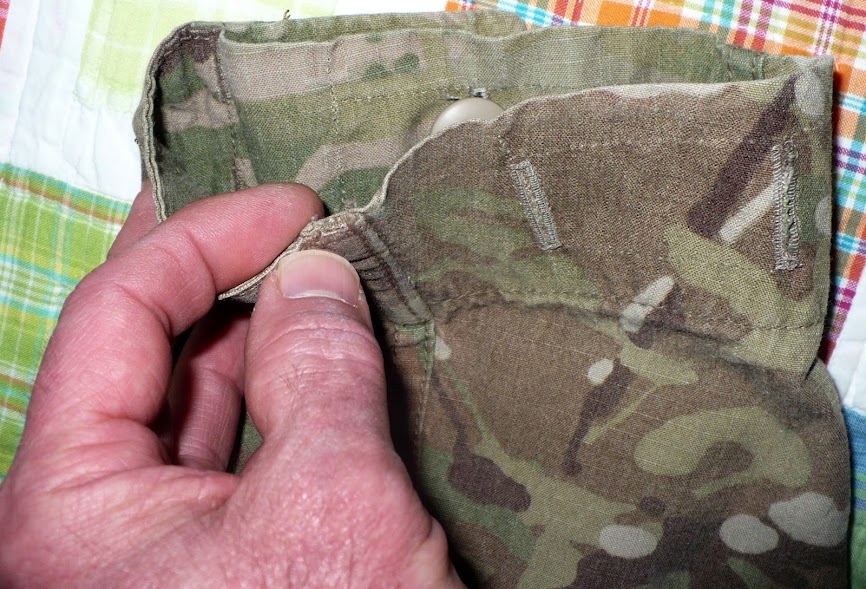 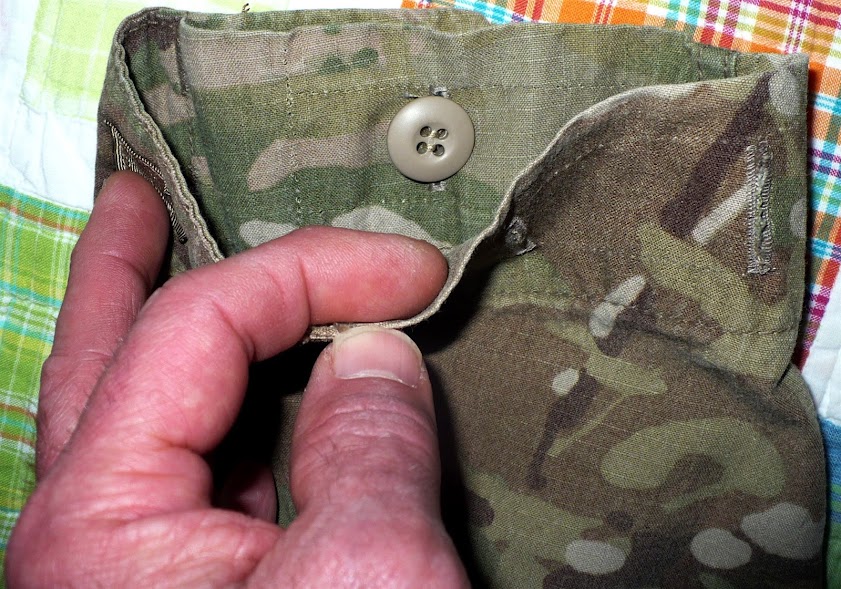 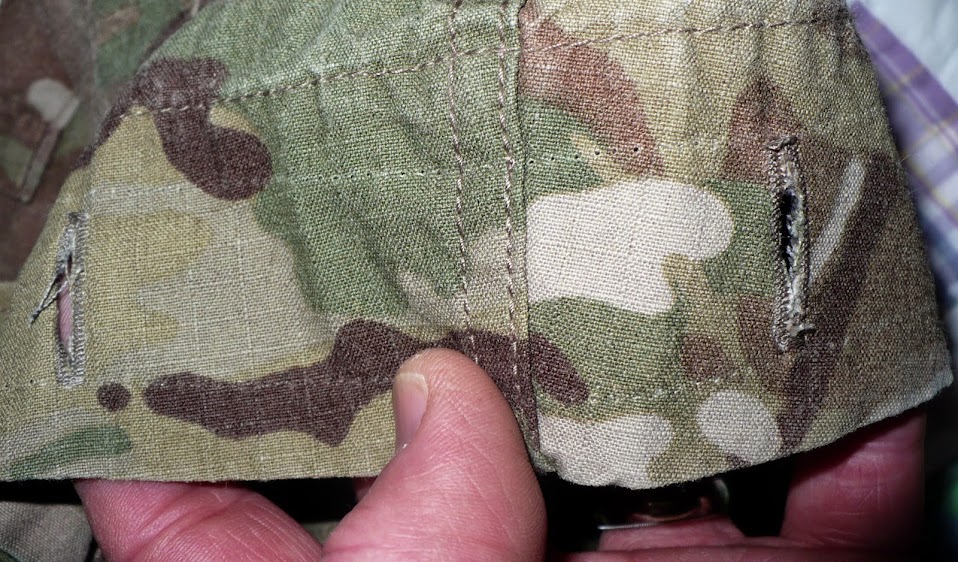 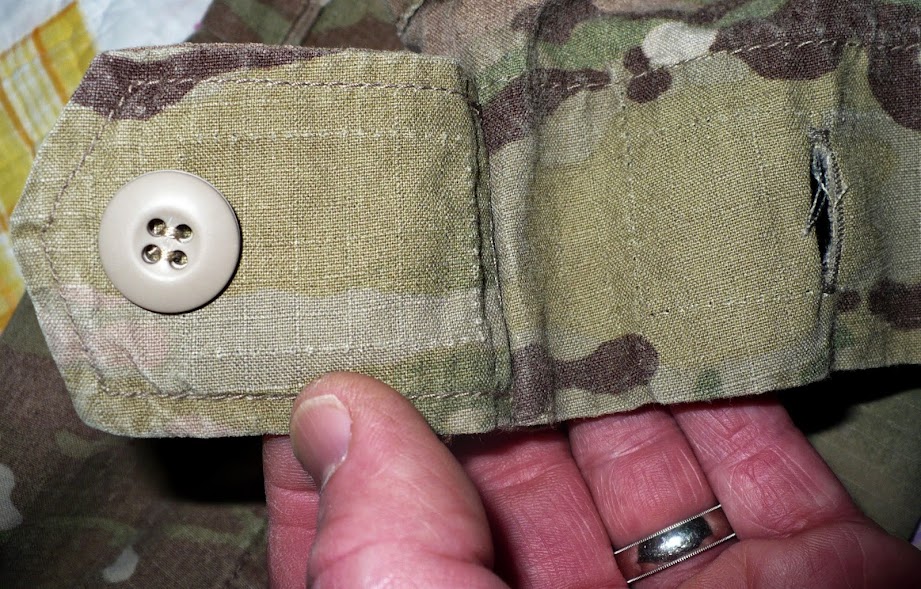 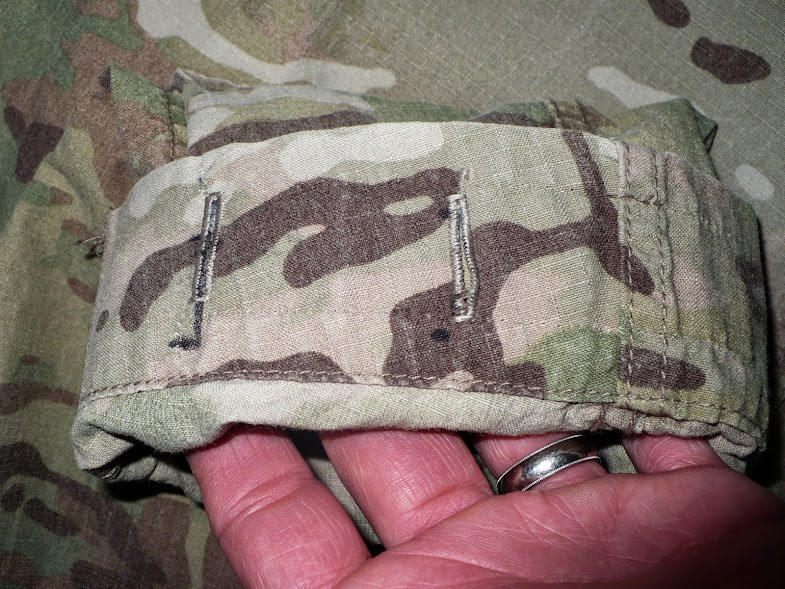 There is a reason most tailors are men! It looks like you do great work.

Back in the mid 70’s after graduating from electrical engineering school. I took up sewing outdoor gear. My wife and I bought a nice White sewing machine (beside Singer that is the only name I know). Back then I was sewing Frostline Kits, down sleeping bags, down vests, down coats, (I still think I have a kit for cross country ski knickers hiding somewhere). All of the items short of the sleeping bag (gave it to one of my boys) are still hanging in my closet and usable.

My mother was a seamstress (out of financial necessity) and I took sewing and cooking in high school. Just goes to show how old I am! Both of those classes not to mention typing, woodworking and metal shop were great life skills to go along with reading, writing and arithmetic. I would hazard a guess that most high schools do not offer these classes any more.

I had a gentleman in my business a couple of weeks ago that sews canvas skirts around mobile homes! He caters to the gas and oil field workers in North Dakota, Texas, Oklahoma and Colorado. He said he started out repairing boat cover, tents, tarps, awnings, etc. He said had more work than he knows what to do with for the last 25 years!

Keep up the good work! It is manly.
Top

You are into something that is an interesting field. Cam would it be appropriate on our forum to back and forth about these things of interest that not directly related to our Ladies?
These discussions Do keep the forum lively...

My families have a long history of Quilting & sewing; photos & more. My wife is a quilter, daughter an art quilter, mother a seamstress and quilter.
Phyrbird
SOKY
Top

That was a very amazing hobby. I do not know if that can be applied to my skill and become a hobby.
corporate team building
Top

For those that can come Kentucky has the Worlds largest Quilt show every spring in Paducah.

The art quilts are incredible. The classic quilts can blow your mind.

We even had an Arabian tapestry exhibit 2 years ago.

AND all the vendors show up with freebies, specials on machines and quilters, and free (some not so free) seminars.

It's normally about 3-4 days, so bring your camper.
Ya'll come, hear?? Send me a PM if you are, perhaps we could meet. I'd be happy to give you a tour of our local shops.
(either quilting or sporting goods)

For those really interested I can link you to a demo sale for AQPS machines.
Send a PM and I'll forward you...
Phyrbird
SOKY
Top

I have wanted to learn to sew as well. For boating items mostly.
J.M. Browning was excellent with a sewing machine as well!

glad my posting about sewing and quilting was well-received, for various different reasons! I, Unfortunately have zero time to even respond to any of this.

19 days left. This is all about getting released from the current batch of lunatics under my care here at Crazytown Elementary.

So I'm sorry I don't even have the time to come up with creative responses to your great ruminations, one day I will.

Carl, first thing though - I am NOT about to go buying ANYTHING since my Bernina 350PE cost a big chunk of change for a 2-teacher salary family! LOL

Take care, and thank your lucky stars you are not teaching 6th grade in my school this year!